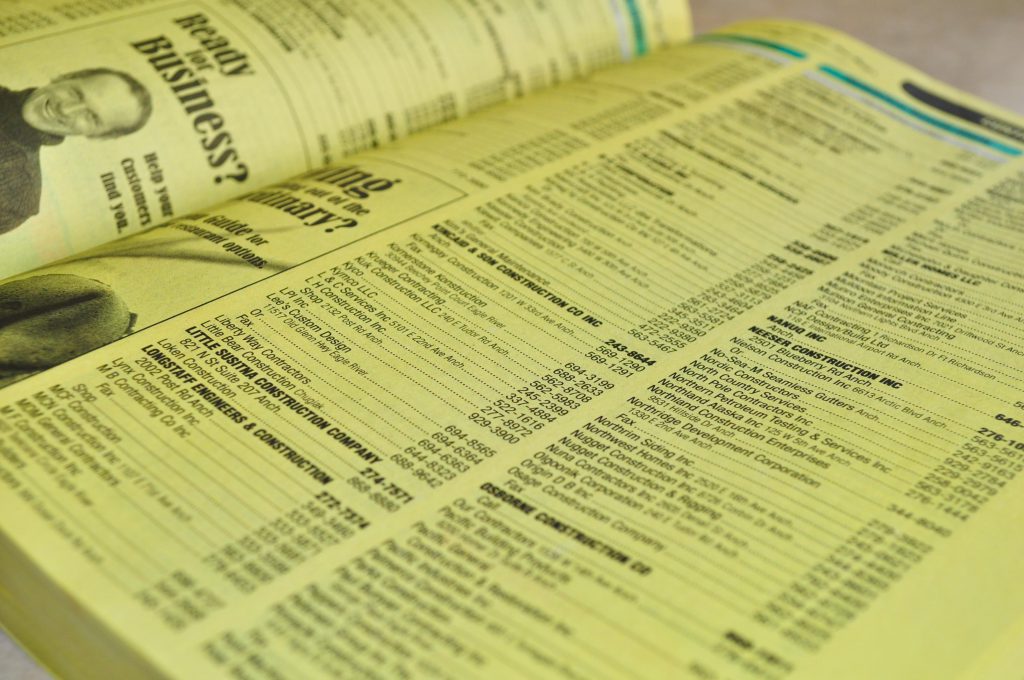 There has always been B2B data providers in UK in some form or another.

The early days of acquiring mailing lists to send Marketing material was based on business contact information that was advertised via products like the Yellow pages. Marketing staff would extract details by circling prospects and writing down address details on outbound mail.

The process was very time consuming and often very little value was made in targeting particular companies for their products.

The mass marketing approach was often taken as a fall back as the information available to aid the targeting of effective businesses was slow to obtain.

As time went by and the use of technology was starting to get involved in the marketing process, the capture of data for mailing labels and effective first personalisation of material by using mail-merge the need for B2B data providers in UK started to appear.

The Traditional publications were now being joined by specialists for certain locations and products like the Thomson Local and Business directories publication created a market for B2B data.

As the companies in the UK grew, the problem with the publications was the data became stale very quickly as they would only be produced on an annual basis.

The need to have up-to-date B2B data in the marketing process became very key to ensuring the value was being gained and not sending to Non-Trading companies.

The B2B industry started to change tact and up-sell their approach and start contacting companies directly to then sell lists of data. This started a trend of selling focused lists by types and classifications grouped by the provider.

As the Internet age came upon us some of the providers started to take advantage of building business presence through websites that sold B2b data. The companies that had sold traditionally in the hard back form, slowly but surely followed suit and started to invest themselves having online presence.

Even though the way B2B data was now being sold was easier, it did not get away from the burden that some many people found with managing big data lists. The importance of keeping the data up-to-date and have good data quality is a full time job. The customer would often find that data was wrong and made it worthless.

As the number of registered companies in the UK grew past the 3 Million mark it was hard to keep track of different pieces of information like contact and address that would change frequently. The data providers would sometimes not publish data if it was incomplete and this left companies with only part of the business picture.

Bigger companies would start to create their own databases and even some of the retail giants like Great Universal stores ended up selling their data and eventually the subsidiary became a data provider and is known today as Experian.

As B2B data market grew the way to which people sold the data would change and traditional volumes or lists were now being replaced with credits and download limits. The access to the websites became easier but some of the user interfaces lacked the ability to show all the data.

The other issue that became apparent was the searching ability of the providers were limited to only to company name or number and lacked the self discovery options.

Over the last decade a government strategy called Open data became pivotal to opening up sets of data controlled by government and regulators so that they can drive more business value. The opening up of the companies house registry in 2015 enabled anyone with the know how for dealing with big data to leverage the information.

After many years of building data platforms for large corporations and giving many employees access to information insights by a click of a button, we felt we could offer this as a service to a wider audience that being SME’s.

The idea and design for the DataEco platform was to build something from the ground up. We would put focus on quality and build it from the master list from the regulatory.

After modelling the data on platform we designed the User Interface to have several different ways to search the data. The graphical visualisations allowed us to represent the 4.7 Million companies and with in a couple of clicks have a couple of 1000 companies to check out individually or download.

We felt the many years of feedback from end users meant that the ease of use and unlimited downloads gave them the control they needed with data.

We also felt that the main difference of offering it at a low-cost service meant the more companies could gain access to the data and insights.

If you would like to dig deeper into the companies behind the numbers – the DataEco platform offers data as a service from as little as £20 a month.

Try DataEco today and get the first 14 days free.

Sign up to a simple membership plan that gives you unlimited access to predefined dashboards allowing for different analysis and views into critical sales and business intelligence.

For a limited period